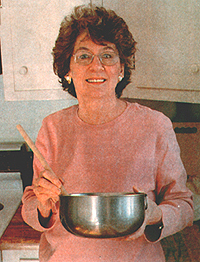 Joyce Sproul started entering recipe contests more than 20 years ago. The first time she entered a recipe contest, Joyce won a designer scarf for her recipe in a La Choy contest. Joyce used their bean sprouts in a spice cake recipe, which, she says, tasted very much like a carrot cake. That, as they say, is history. Over the next two decades of contesting, Joyce has won prizes from Quaker Oats, Tropicana, Kraft, Woman’s Day, Family Circle, Hotel Sofitel, Florida Beef, Kretschmer, Campbell Soups, Swift-Eckrich, Weight Watcher’s, Dunewood Wines and Progresso Soups… among others.

BEST SURPRISE WIN: “Just before the deadline in a sandwich contest, I hurriedly sent in a recipe without testing it,” Joyce said. “I didn’t have much hope of winning but several weeks later I was surprised to receive a letter informing me that I had won the Grand Prize consisting of a range, a dishwasher,a refrigerator, a microwave, and a washer and dryer.