Merry Graham is a Southern California award-winning home cook, published author, grandma to 6, and an all around Foodie! She has appeared on Food Network’s Clash of the Grandma’s (2015), as a top 3 finalist on The Rachael Ray Show’s Great American Cookbook Competition (2014), and on the World Food Championships (2012 – 2015). In 2012, Aetna and Bobby Flay named Merry the “The Healthiest Cook In America” – and splashed her face, title and dish across the marquee at Times Square!

A self-taught cook, Merry was introduced to the enjoyment of culinary challenges in her early twenties when she volunteered to cook daily lunches for 40 workers at her church. The challenge came as Merry opened a mystery day-old box of ingredients donated from a local commissary. “I was doing Chopped before Chopped ever existed!” she jokes.

A homemaker and mother of four (including twins), Merry had plenty of practice in the kitchen over the course of her child-rearing years. She whipped up nutritious, fast and kid-friendly meals for health and financial reasons. “My whole focus was to develop healthy kids in all areas; physically, academically, spirituality, and in the sweetness of their souls! In a way, making my children homemade healthy food truly fed them in all four areas!”

Talk about a supermom, in addition to getting three meals-a-day on the table, Merry home-schooled all of her children from grades K-12, founded support groups, and ran a successful swimming school, Merry School of Fish, for 15-years.

In 2009, Merry discovered the world of competitive cooking, ironically through an essay contest. She entered, and won, an all-expense paid trip for two to the Aspen Food & Wine Festival, by submitting a paragraph on how she “lives in the green”.

Merry states, “While sipping wine and nibbling delicious morsels in Aspen, I realized I was a Foodie! I found my tribe!” She immediately went home and Googled “win food and wine festival”, which led her right here to www.cookingcontestcentral.com and a variety of cooking contest resources.

The very first recipe contest Merry entered was in the Z’Tejas Southwestern Grill’s Chile Fest Dessert contest. She entered a single recipe and won! Her winning dessert “Chocolate Chile Lime Shooter” was featured on the restaurant’s menu for the following month and she received a private dinner for 10, prepared by the Z’Tejas Executive Chef.

As a competitive cook, Merry’s biggest wins have included three $10,000 checks, a $25,000 check, and a trip for two to Scotland! Three continents, seven states, 25 live cook-offs, countless recipe contest wins, and over $130,00 in cash, travel, and prizes… the rest is history!

Today, Merry can be found in her Santa Clarita, California kitchen, creating a tasty new recipe, tackling a challenging contest, or cooking up a delicious meal for family and friends. A hands-on grandma, Merry especially loves welcoming her grandkids into the kitchen and passing along her love for cooking with Hadley, Olive, Frankie, Cassidy, Jeremiah and Baby Grayson.

At 61-years-old, Merry shows no signs of slowing down. She swims regularly, travels the world with her husband of 39-years, and loves cultivating friendships with the other competitive cooks and foodies friends that she meets along her travels. “The best prize I’ve won through contest cooking is the wonderful community of passionate, kind, talented, friends that cook! I receive so much culinary and life inspiration from them all! It is amazing that we can compete against one another yet still cheer when we lose and they win!”

Yes, Merry has become quite the fixture in the world of competitive cooking, securing her title as, arguably, one of the best. But, though we all may know her as a “winner”, “tough competitor”, and a “damn fine cook”, the heart of Merry Graham, who she is and what she’s about can simply be summed up by reading the welcome note on her website, A Merry Recipe:

Step into my kitchen. You are welcome in my home.
The door is always open.
Come sit at the counter and I’ll make you a warm bite.
Let’s talk about the week, our dreams, adventures, hardships and blessings.
Stay for dinner… there’s always room for one more at my table!

Step into my kitchen and share a slice of this delicious life with me. 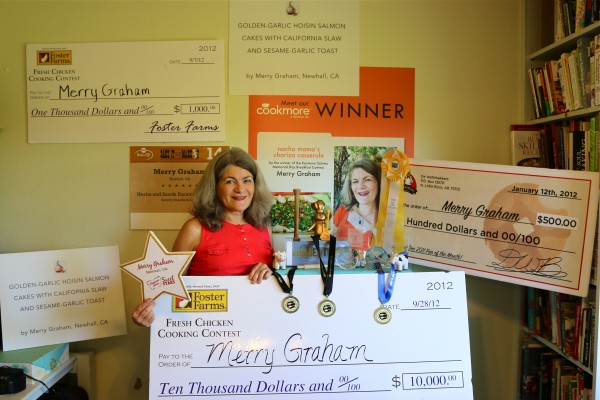