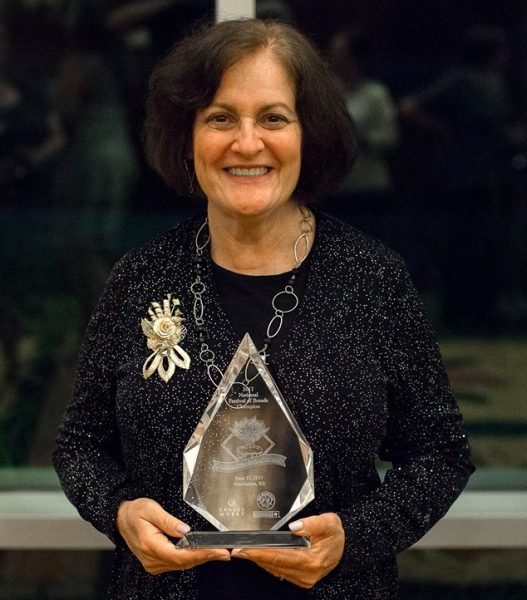 Congratulations on your induction into the CCC Hall of Fame! Tell us a little bit about yourself.

I am thrilled  and honored to have been chosen as the 2018 CCC Hall Of Fame winner! I am a mother of 2 and a grandmother of 3. I’ve lived in Maryland my entire life. I’ve been a cashier for the grocery chain Giant Food for 34 years and I plan to retire in May 2020. I like getting ideas for cooking contests from the items I see go across my grocery belt! My customers are always asking me if I have won any contests lately, and they love hearing about my cooking adventures! Also I enjoy gardening, crafts, painting, sewing and photography. I don’t make a lot of sweets on a regular basis because because I know my husband and I would gain too much weight. He does enjoy when my contest entries are cookies or other snacks!

When it comes to cooking or creating recipes, who or what inspires you?

My original inspiration was my mother who let me help her when I was a little girl in her kitchen. She had entered cooking contests like the Delmarva Chicken Contest and a National Pork Contest in the early 1970’s and she was a big fan of the Pillsbury Bake Off! She also used to enter in-store contests and she won things like a chest freezer and a Redskins jacket. When I was very young, she would give me a piece of fat and a knife and I would play “Butcher Shop”. I loved all of the home economics classes but especially cooking class. I enjoyed helping other students with things like learning to pressure cook and I would do the jobs no one else wanted like cutting up a whole chicken.
These days I am inspired by the new cooking trends or new products. A lot of th time I just get an idea in my head and go from there!

How did you get started in cooking contests?

I was interested in cooking contests from the time I was a teenager. When I was a newly married young 20 year old, I entered and became a finalist at the 26th Pillsbury Bake Off in 1975 in San Francisco, CA. I entered again off and on for many years but was not selected. I finally became a finalist again for the 42nd Pillsbury Bake Off, 2006 in Orlando, FL. I found this out in December, 2005. Soon after, I became a Cooking Contest Central member when I was told on another website that Pillsbury Bake Off finalists were chatting there. I’ve been a member ever since! I am so thankful for CCC because without it, I wouldn’t have known about many contests that I have entered and enjoyed over the years! And, of course, I treasure the memories and all of the wonderful friendship I have made along the way! I have found that my cooking contest friends are my true life long friends whether they live near or far and we always have so much fun together!

Can you tell us some of your favorite or most notable contest wins?

2011 How Do You Tam Tam Contest finalist

2013 All You blog contest with Glad winner