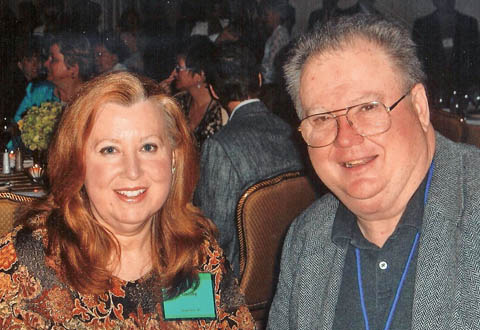 Bob and Edwina Gadsby both grew up in southern California and were influenced in many ways by that state. When they met, Edwina was an Accountant with the San Diego City Treasurer’s office and Bob was a U.S. Customs Officer at the world’s busiest land border port of entry. Immediately after getting married, they left San Diego and settled in the rural Inland Northwest, eventually ending up in Montana. Bob works as a Branch Chief with Customs and Border Protection (part of the Department of Homeland Security), and Edwina is currently a homemaker and does volunteer work. They share their home with Beau, a chocolate Labrador Retriever and will celebrate their 20th wedding anniversary this year.

How Did You First Get Into Contesting? Edwina stumbled into contesting one morning in 1994 while reading Country Living magazine. For some reason an announcement for a recipe contest caught her eye. While she has always loved to cook, she had never considered entering “cooking contests”. She regarded them with the same skepticism as sweepstakes (does anyone ever really win these?). This one beckoned to her, as the grand prize was an all expense paid trip to a well-known bed and breakfast in Vermont. Visiting Vermont in the fall had always been a dream of the Gadsby’s. The sponsor, Land O’Lakes, was looking for an original breakfast recipe. To Edwina’s surprise, her Apple Cinnamon French Toast won the grand prize. That was it, she was hooked!

A few months later, Bob (a good cook in his own right) tried his hand at contesting. Jim Beam Brands sponsored a contest called “Bourboncuing with Booker”; Booker Noe is the grandson of Jim Beam. Bob’s unusual Peach of a Bourbon Basting Sauce won them a trip to Kentucky where Bob barbecued in Booker’s back yard, and took first place in the sauce category. Now they were both hooked!

Most Satisfying Win: The Gadsby’s are constantly amazed at the unique adventures contesting has presented them. They have (twice) barbecued with Jim Beam’s grandson in Bardstown, Kentucky (where they learned the true meaning of southern hospitality). They have each been a finalist at one of Southern Living magazines’ fabulous destination cook-offs, where Bob shared the stage with Al Roker and Edwina with Tyler Florence. They have worked side by side with the staff of Cooking Light magazine in their test kitchen. They were wined and dined at the Rainbow Room in NYC by Paul Newman (screen legend and great humanitarian), talk about a fantasy coming true! Bob was a judge at the Jack Daniel’s World Championship Invitational Barbecue in Lynchburg, Tennessee. They enjoyed a fabulous Cape Cod getaway in picturesque Sandwich, Massachusetts courtesy of the Louis Rich “Make Your Own Sandwich” contest. Edwina prepared her “prize winning” dessert on national television on the now defunct ABC “Mike & Maty Show” (a chauffeur and limousine met them at the airport and whisked them off to their suite at a luxurious hotel in Beverly Hills). John Harrison (Mr. Ice Cream) gave them an exclusive tour of the Dreyer’s ice cream plant in Houston, Texas and then Edwina prepared her “Cinn-ful Pecan Caramel Ice Cream” in their lab. They have enjoyed Fetzer and Sutter Home Wineries in northern California and have had their recipes published in almost every major lifestyle magazine and posted on web sites (like Rachel Ray).

Bob and Edwina have won cash, trips, and enough appliances to outfit family and friends for years to come. The most unexpected “reward” has been all the wonderful people they have had the opportunity to meet. Many of their cook-off “competitors” are now life-long friends. “People seem surprised by the sharing aspect of this hobby. Many tend to think cook-offs are cut throat competitions, and are quite surprised to learn most of us regard them more like family reunions.” said Bob. “We personally view cook-offs as opportunities to visit with old friends and make new ones. We contesters love to share information with one another, and try to encourage and inspire one another. We realize we can’t win every contest and are sincerely thrilled when a friend takes the grand prize.” he said.

Bob always says his most satisfying win was the Paul Newman contest where he won $10,000 for the charity of his choice. He split it between a small volunteer fire department and a rural library.

After many wins (and even more losses) the Gadsby’s are still as enthusiastic about this hobby as they were in the beginning. Each new contest presents a new challenge. “It is the creative aspect of contesting that excites us and knowing that we are only limited by our imaginations. We have been exceedingly lucky, but most of all, we’ve had tremendous fun!” said Edwina.

Finalist: IGA – Trip for 2 to Chicago to compete

Finalist: National Beef – Trip to Ft. Worth, TX to compete

1st Prize: Emeril’s Kick it up a Notch – 10 piece set of Emerilware

Advice to Other Contesters: We’re often asked what is the secret to winning. The simple answer is that there is none. Go with your instinct and don’t spend too much time over-thinking a recipe or trying to develop the perfect strategy. Above all, have fun. If you go to every cook-off expecting to win you’ll come away disappointed; if you go because you enjoy cooking and like to meet and share the experience with others of the same heart, you will always come away a winner.