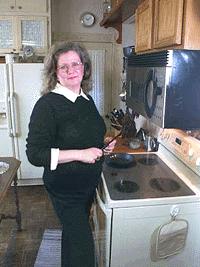 Diane Sparrow is the mother of four adult sons and learned to cook out of necessity. She started to enter recipe contests to make it fun. She began her contesting career 4 years ago when a friend suggested that a breakfast egg recipe she makes should be entered in the Iowa Egg Council. So, she entered. . . and won. Her first national contest win was Gold Kist farms in 1997. She saw their contest and noticed the prizes included a refrigerator. Since hers was on the blink at the time, she entered, won 3rd place, got her new refrigerator and was hooked on contesting. “Some of the most fun wins are the small contests that you forget you have entered until you get notification,” Diane says. “It is seldom the recipe you think will win that makes it. And remember, it is supposed to be a hobby, so enjoy it!”

FUNNIEST CONTEST: Diane once competed in a grilled cheese recipe contest at a local supermarket. After drawing the last preparation spot, she found out the judge had to leave at a certain time to attend her daughter’s recital. When the rest of the contestants went overtime preparing their recipes, Diane found herself with only 4 minutes to throw together her creation. Keeping her cool, Diane threw her sandwich together, grilled it in record time and won the Grand Prize.

ADVICE: “Put the most effort into the area that you are the strongest in. Most of us are better at one area — Baking, Grilling , Meats, Healthy, etc. Unless you have unlimited time to contest enter your strong areas first and use any extra time to fine tune your weak areas. Also don’t over think your recipes.”