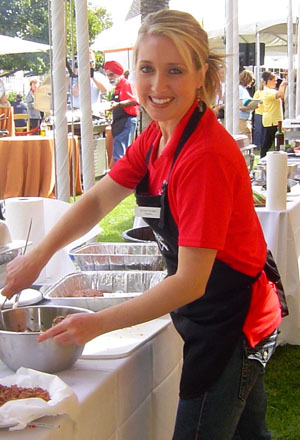 Jenny Flake- I was born and raised in AZ. I’ve been married for 10 years and have 2 cute little boys. I didn’t get started cooking until about 7 years ago when we moved into our first new home. I had no idea what I was doing so I watched A LOT of Food Network and started reading and collecting cookbooks. Come to find out, I really enjoyed it. Late 2003 I came across a Pillsbury Bake-off that was shown on Food Network. After watching the show, I was completely motivated to try to make it as a finalist in the next bake-off. I spent hours researching past bake-offs online and got to working on my creations. I could hardly believe I was chosen as a Finalist in 2004. It was an experience I’ll never forget and have been contesting ever since. I am so glad I fell into this fun hobby, I have met so many great new friends and find it challenging and exciting!

BEST SURPRISE WIN: During my first year of contesting, I created a pizza recipe for the Mama Mary’s Pizza Contest and sent it in on a whim without trying it out. First, I won as a Semi-finalist and then later found out I won the Grand Prize for a trip to Disney World and $5000. My family thought I was joking.

ADVICE: Don’t let your losses get you down. Turn right back around and focus on another contest. Aside from large cook-offs, don’t be afraid to enter recipes that you haven’t practiced in the kitchen. Some of my best wins have come from recipes that were just cooked up in my mind! Also, find a system that will keep your contesting organized. Whether it be on the computer or on paper, keep it organized!