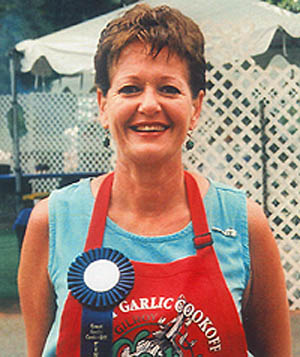 Michaela Rosenthal is a Montana native who has lived in California for more than 25 years, and she comes from a family of good cooks — one of those “rare” Californians (no pun intended) that repares beef 3-4 times a week. Not surprising, since she grew up on a ranch.

Michaela started entering contests in the spring of 2004, after a friend bought her a copy of “COOK-OFF: Recipe Fever in America.” She entered two recipes and was called a few weeks later and told she was one of eight people out of North America to qualify. She went to Gilroy, California for the annual Gilroy Garlic Cook-Off and met Diane Sparrow and other members of CCC that she read about in the book. “I couldn’t believe it!” she says. “One month I was reading about these ladies in a book, and the next month I was eating dinner with them!”

Obviously, she has the touch. In just a few months since she began contesting, she has been a prize-winner in several national contests…. “If someone would have told me the course of events my life would take this spring, since I started entering contests, I would have never believed it!” she says.

BEST SURPRISE WIN: A couple of years ago I was having a fancy (expensive) sit-down dinner party for 10 people. Right before I was to start serving the first course, I noticed that the tip to my chef’s knife was missing!!! Not finding it on the cutting board, I was forced to throw the whole dinner out. I was devastated, having cooked for two days!… We ended up ordering take-out.

ADVICE: “Believe in yourself”