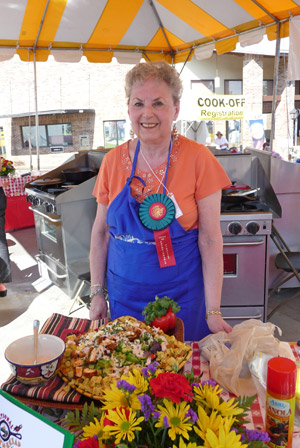 Patricia Harmon began entering recipe contests in 1989, but she says she didn’t really get cooking until 1996, when she retired from her office job. Since then, she’s been a three-time Pillsbury Bakeoff Finalist. $5,000 as well as a finalist in 8 other national cook-offs, including three times in the National Beef Cook-Off and twice representing Pennsylvania in the National Chicken Cook-Off, and finalist in 2009 National Cornbread Cook-Off. Pat’s cooking prowess has also earned her a 1997 trip to Italy for a local radio recipe contest. “I started entering recipe contests because I have always loved to cook and bake,” said Pat, who is an avid Pittsburgh Steeler fan.

FUNNIEST PRIZE: Publication of her winning recipe in Woman’s Day magazine. “I didn’t know it until they sent me a copy of the magazine.”

ADVICE: “Think quick and easy and follow the trends for most contests. If you think something is too simple to win, enter it anyway. It may be just what the judges are looking for.”