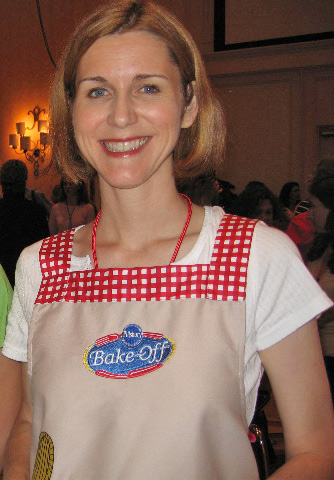 Anna Ginsberg won the BIG ONE which was a thrill not only for her and her family but for all her friends at CCC as well. Walking away with the Million Dollar prize at the 2006 Pillsbury Bake-off was something that Anna had been working on for a long time. The Austin, TX homemaker is a very experienced contester. For Pillsbury, she won the Grand Prize in the “Cooking for Two” category with her baked chicken with spinich stuffing that used a package of Pillsbury Dunkables, frozen waffle sticks, to make stuffing and used the syrup that comes with the waffles as a sauce. She created the recipe specifically for the Bake-off. Anna said she began her cooking career when she wasn’t much older than Emma, as a 6-year-old daughter. She was a “latchkey kid” who had to be home alone each day until her parents returned from work. She grew up in Houston and San Antonio and graduated from the University of Texas at Austin. As for her Pillsbury winnings: She said, “I am so amazed at all this money, I’m not sure what to do with it. The first thing she bought was a new curling iron and some star fruit. “It’s still kind of a shock to think I could buy anything I want. Our little joke before the contest was that if I won, I’d buy my daughter a bouncy house like they have at Toys R Us. So that was the first thing we did when we got home.” ” My daughter will start school in the fall and before this I was thinking about going back to work. Now I don’t have to. Maybe I’ll use some of it to remodel my kitchen so I can use all the new appliances I won. Right now, it’s just too much to think about, so I’m just going to bake some cookies. “Her advice for fellow contesters is to send in a lot of recipes. “I usually send about 50 to Pillsbury, 30 to Southern Living and between 1 and 5 to others,” she said. “For the California Raisins contest, though, I just sent one. “Also, try to do something creative. I like to eat out a lot and really study what the chefs are doing because they are always on the cutting edge of trends. Then I try to do it at home, but make streamlined versions using foods that are prepackaged or in a mix.”

NOTABLE WINS: Last year, she netted $10,000 in the California Raisins contest and recently won $500 in the “Mix It Up With Betty,” a Betty Crocker contest using cake mix and $2,500 in a cheesecake contest. These were in addition to the Million Dollar prize at the 2006 Pillsbury Bake-off noted above.

FUTURE BAKE-OFFS: “I guess my career with Pillsbury is over now,” she said. “I’ve been working at winning this one for a long time. It’s the biggest, after all. But once you win, you can’t enter again.” Our bet is we will be hearing from Anna for a long time to come.

ADVICE: “Send in a lot of recipes”