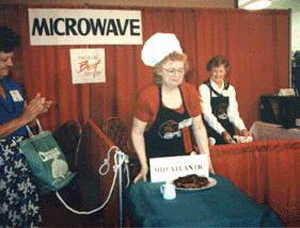 Shirley DeSantis may have picked up the $5,000 first prize in the 1989 National Beef Cook-off’s Microwave category (left), but it was the Pillsbury Bake-off that made her get the rest of the family into recipe contests. She was a finalist twice, right about the time Pillsbury introduced the “three times and your out” rule. So Shirley got the kids involved. . . and it paid off. Husband Alex and daughter Miranda were the first father/daughter finalists, then son Tony was a finalist in the following contest. Miranda did it by herself in the next bake-off, and Alex and Tony were the first father/son finalists in the following contest. It should come as no surprise, then, that Alex Jr. was a finalist in another bake-off. Shirley went back for her final “three times your out” in 2004. Nor should it come as a surprise that Tony was also a finalist at the National Beef Cook-off when Shirley won in 1989.

ADVICE: “Read the rules. . . then read them again. No matter how great your entry is, if you don’t follow every rule, your entry will most likely end up in File 13.”